Humans have dramatically disturbed the earth's N cycle to the point that this alteration is considered one of the most serious threats to the global ecosystem. Part of the excess N circulates through the atmosphere and is deposited with precipitation, reaching areas that would otherwise be free of direct human impact. Atmospherically deposited N has an acidifying effect on aquatic ecosystems, and most studies of N pollution have focused on this aspect.

However, recent research has also addressed the global impact of atmospherically deposited N as a nutrient in lakes. Recent findings indicate that increased atmospheric deposition of reactive nitrogen of human origin has caused changes in the pattern of ecological nutrient limitation in lakes in the northern hemisphere. An increase in the stoichiometric ratio of nitrogen (N) to phosphorus (P), and hence a shift from pristine N limitation to human-induced P limitation of phytoplankton growth, seems to have been driven by deposition of atmospheric N. These findings challenge the classical paradigm of lake productivity being naturally limited by P availability. However, deposition of atmospheric P may also be highly relevant.

In this work we show how, in contrast to what could be expected based on the aforementioned studies, dissolved inorganic nitrogen (DIN) concentration has decreased in the Pyrenean lake district over recent decades, despite there being an increase in deposition of atmospheric N. This observation may be related to an increased P load in lake water, as a result of higher atmospheric inputs. These changes are causing the trophic status of the lakes to revert from being P-limited to being N-limited. 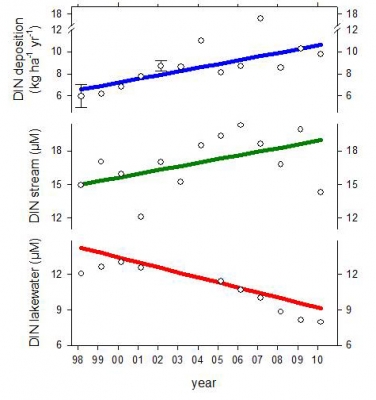 Time trends of DIN in the Conangles catchment. From top to bottom: time-series of dissolved inorganic nitrogen (DIN) in atmospheric deposition, Conangles creek and Lake Redon. Data are grouped by water years (i.e. from 1 September to 31 August). 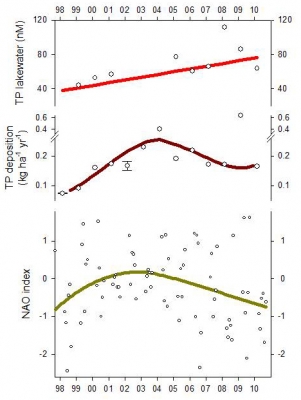 Time trends of TP in the Conangles catchment. From top to bottom: total phosphorus (TP) in Lake Redon and in atmospheric deposition, and values for the monthly NAO index during the spring and summer (April to September) months. The NAO index is correlated with the phosphorus deposition on the Pyrenees.

Our data also indicate that increased P deposition may be related to the meteorological conditions that influence the transport of dust from northern Africa and the Iberian peninsula to the Pyrenees during the period studied. These results thus reveal a mechanism by which the climate interacts with the global human impact on lake ecosystems.

According to the theory of Bergström and Jannson, lakes where phytoplankton is N-limited show a chlorophyll-a (Chla) to TP ratio that responds proportionally to increasing DIN, up to the point where they become P-limited. Beyond this point, the Chla/TP ratio remains constant with higher DIN. Therefore, the breakpoint between the two segments in a plot of DIN vs. Chla/TP can be considered as a threshold between P- and N-limitation for phytoplankton. Pyrenean lakes lie on the threshold. Consequently, being between P-limitation and N-limitation of phytoplankton, Pyrenean lakes are particularly sensitive to the ecological changes induced by varying depositional loads of N and P. About 33% of lakes were below the threshold in 1987 while this percentage currently stands at c. 70%. These observations potentially indicate that the phytoplankton from the lakes in the Pyrenees has shifted from being P-limited to N-limited. 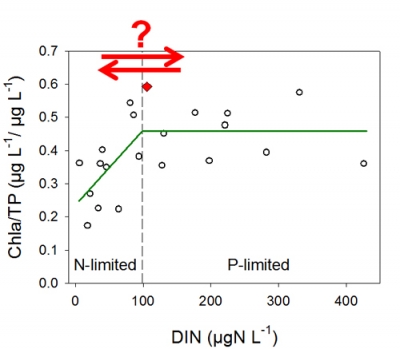 The N- and P-limitation domains. The relationship between phytoplankton biomass (using chlorophyll-a (Chla) as a surrogate), TP and DIN is shown in this graph. The plotted data are regional averages of the ratio Chla/TP and DIN concentration for lakes in Europe and North America. Pyrenean lakes lie at the threshold indicated by the breakpoint in the line representing the Chla/TP to DIN relationship. Slight changes in the DIN supply can therefore shift them between the N-limited and P-limited domains.

The effects observed in the Pyrenees are likely occurring in other lake districts. Here we present direct evidence, which was missing in previous studies, of the link between atmospheric P deposition and the N:P stoichiometry and the nutrient limitation status of phytoplankton in a lake. This provides a plausible explanation for the observed regional pattern of decreasing DIN in the whole Pyrenean lake district, and proves that increasing DIN deposition alone does not necessarily lead to increased DIN in lakes (and to a subsequent shift to phytoplankton P-limitation) but that P deposition plays also a role. This process is comparable to the atmospheric fertilization of remote areas of the open ocean, and may be included in the list of the biogeochemical effects of the global aerosol. In our case, variations in the P load were attributed to changes in the natural fluxes driven by meteorology. Mineral aerosols are the main source of atmospheric P; however, human influence is already noticeable in the global atmospheric P cycle and may eventually gain ecological relevance.