Measuring the age of water

The isotopes of water (deuterium, tritium and 18O) can be used to determine the “age” of water, that is, the time water spends in the catchment in average since it is deposited as rain or snow, the so called mean residence time (MRT). Despite hydrograms show that the amount of water falling on the headwater catchments in the National Park during a storm is drained out in just three or four days, and that the bulk of the seasonal snowcover melts in two or three months, we have estimated (from previous deuterium and 18O measurements) that the MRT of water is of the order of one year or longer in these alpine catchments.

This time could be even longer, as deuterium and 18O tend to underestimate it. More precise estimates can be obtained by using tritium. Deuterium and 18O are stable isotopes and are used to trace the mixing of precipitation water in the catchment over time to estimate MRT. In contrast, tritium is radioactive and its decay rate is a more accurate clock than simpler estimates from mixing.

In the TRANSFER project, we are measuring tritium in precipitation and in three inlets and the water column of lake Redon during a whole seasonal cycle. In addition, we measure deuterium, 18O, major solutes and nutriens in the same samples. The three inlets correspond to the three main sub-catchments of lake Redon watershed. They flow intermitently most of time. In order to capture the discharge episodes, we have installed autosamplers in the inlets, equiped with rain and water level sensors. Water level data will allow us to characterize hydrologically each subcatchment, and tritium (and other chemical tracers) data will be used to estimate MRT of water in each subcatchment and the lake itself. 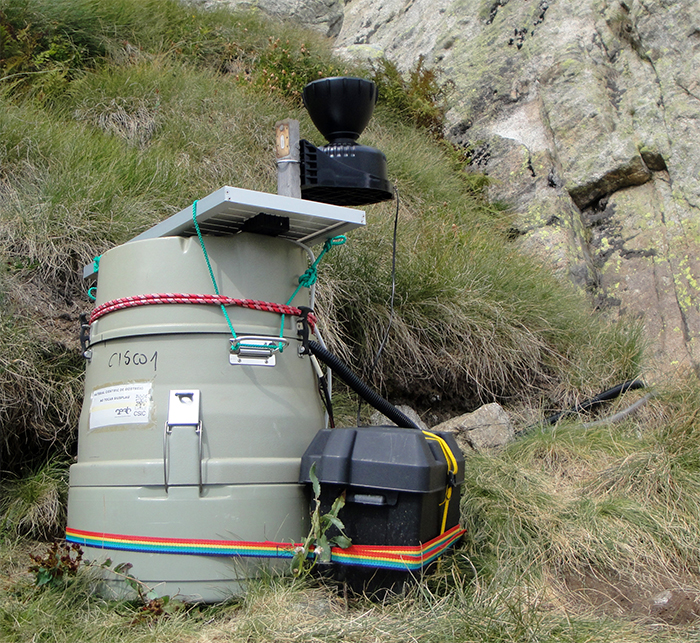 One of the automatic samplers deployed in lake Redon. A datalogger records precipitation and water level in the stream chanel every 10 minutes and triggers the sampling during storm events. The sampler can collect up to 24 samples.

Every month (during the snow-free season in 2017), we have taken a composite sample including all events occurring that month. During the snow season, the inflows are practically inactive and out of reach under several meters of snow. We plan to sample the whole snow cover when it reaches its maximum thickness before melting, and restart an intensive sampling of the inlets as soon as the inlets are again active at the onset of snowmelting. 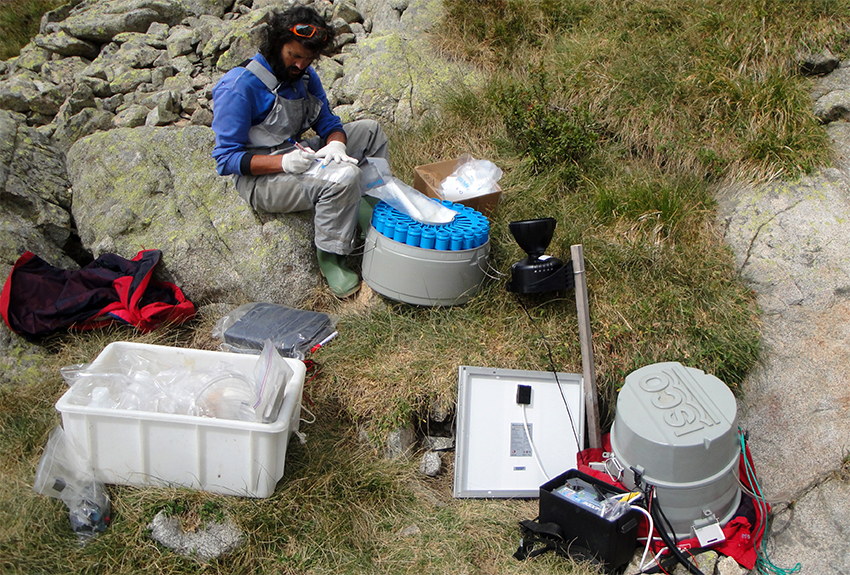