Limnological studies started in Lake Redon (formerly called Redó) in 1984. Since then, Lake Redon has been the flagship site of research of LOOP. More than 40 national and international projects have been carried out here. After nearly 30 years of continued research, Lake Redon is one of the most (if not the most) studied alpine lakes worldwide. 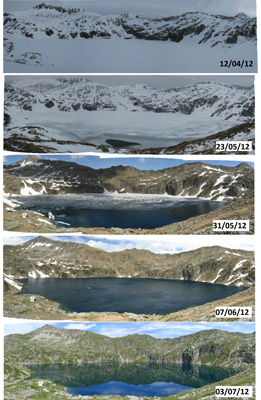 The catchment is of granodiorite bedrock; 76% of its area is covered by a poorly-developed soil layer with an average thickness of 0.35 m. The main vegetation communities are alpine meadows: Carici-Festucetum eskiae (36%) and Ranunculo-Festucetum eskiae (23%), Festuca eskia being the dominant species.

Since 1984, a number of studies have been conducted in the lake. Since 1996, a regular limnological monitoring programme is being run in Estanh Redon. There is a cabin on the shore of the lake with a small field lab. There is also an automatic weather station, currently run by Meteocat, with data accessible on-line.

The monitoring programme encompasses monthly samplings of the lake at five different depths: near surface, epilimnion, metalimnion, upper (photic) hypolimnion, lower (dark) hypolimnion. Samples are analysed for major solutes, nutrients, dissolved organic matter, and dissolved carbon dioxide and oxygen. Samples integrated over the whole water column are taken to assess bacterio-, phyto- and zooplankton specific composition and biomass. There is a chain of thermistors permanently deployed, recording the temperature at nine depths along the water column every 10 min, and a pressure sensor to record the water level fluctuation with a 30 min frequency. Sedimentary fluxes are determined from materials collected by two sediment traps installed in the deepest point of the lake. 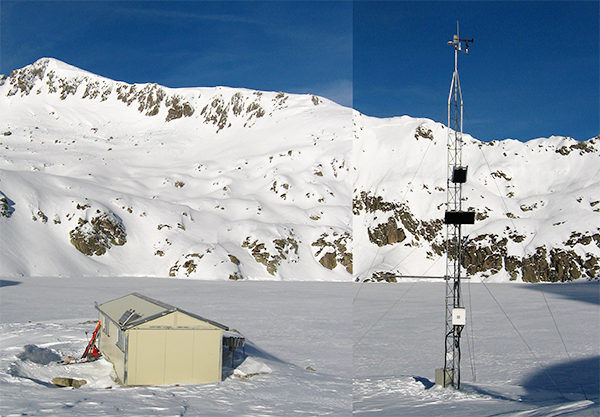 In addition to the lake water, rain and snow are also collected to determine the atmospheric deposition of major solutes, nutrients and some contaminants, in order to monitor their time-trends, their effect on the lake and its catchment, and to examine their relationship with climate change and human-induced causes.

In the course of several research projects, a number of sediment cores have been retrieved from the lake and analysed, with the aim of reconstructing the environmental history of the lake and its surrounding area.

All this research has shed light on Global Environmental Change and its effects, in the past as well as in present days. Some examples are: the evolution of winter/spring climate in the Pyrenees during the last 10,000 years (Holocene); the effect of the airborne nitrogen and phosphorus inputs on the trophic status of lakes; the pollution of lakes by lead (and other metals) spanning more than two millennia; the combined influence of climate drivers (such as the NAO) and human emissions on the regional and global atmospheric fluxes of trace elements on the Pyrenees.

For a full list (Google Scholar) of publications presenting or citing research conducted in Lake Redon, click on this link.