Decadal trends in atmospheric deposition in a high elevation station: effects of climate and pollution on the long-range flux of metals and trace elements over SW Europe

Atmospheric fluxes are an important component of the global cycle of many elements. These fluxes are often caused by long-range transport of elements from distant emission sources to receptor areas, where they are scavenged by precipitation and deposited on land or ocean. In each environment, the atmospherically deposited elements may have an important effect on biogeochemical cycling in the existing ecosystems.

Atmospheric long-range transport takes place in the free atmosphere above the mixing boundary layer, which generally has a depth of 1,000-1,500 m. The chemistry of the free atmosphere can be thus considered to reflect the composition of the global atmosphere better than the boundary layer below it. High mountains protrude above the boundary layer, intercepting the global flux of elements. Therefore, high elevation stations are one of the best settings to monitor the long-range (i.e. regional and global) transport of chemical elements. In addition, high mountains are usually free of direct local impacts that could mask global background signals.

In the lake Redon station we have been monitoring the deposition of trace elements since 2004. Here we analyse the time series of data in order to determine the variation in deposition over the past decade, and to examine in detail the influence of climate and the changes in anthropogenic emissions on the trends detected.

Trace element deposition did not show a simple trend. Rather, there was statistical evidence of several underlying factors governing the variability of the time-series recorded: seasonal cycles, trends, the effects of the amount of precipitation, climate-controlled export of dust, and changes in anthropogenic emissions. 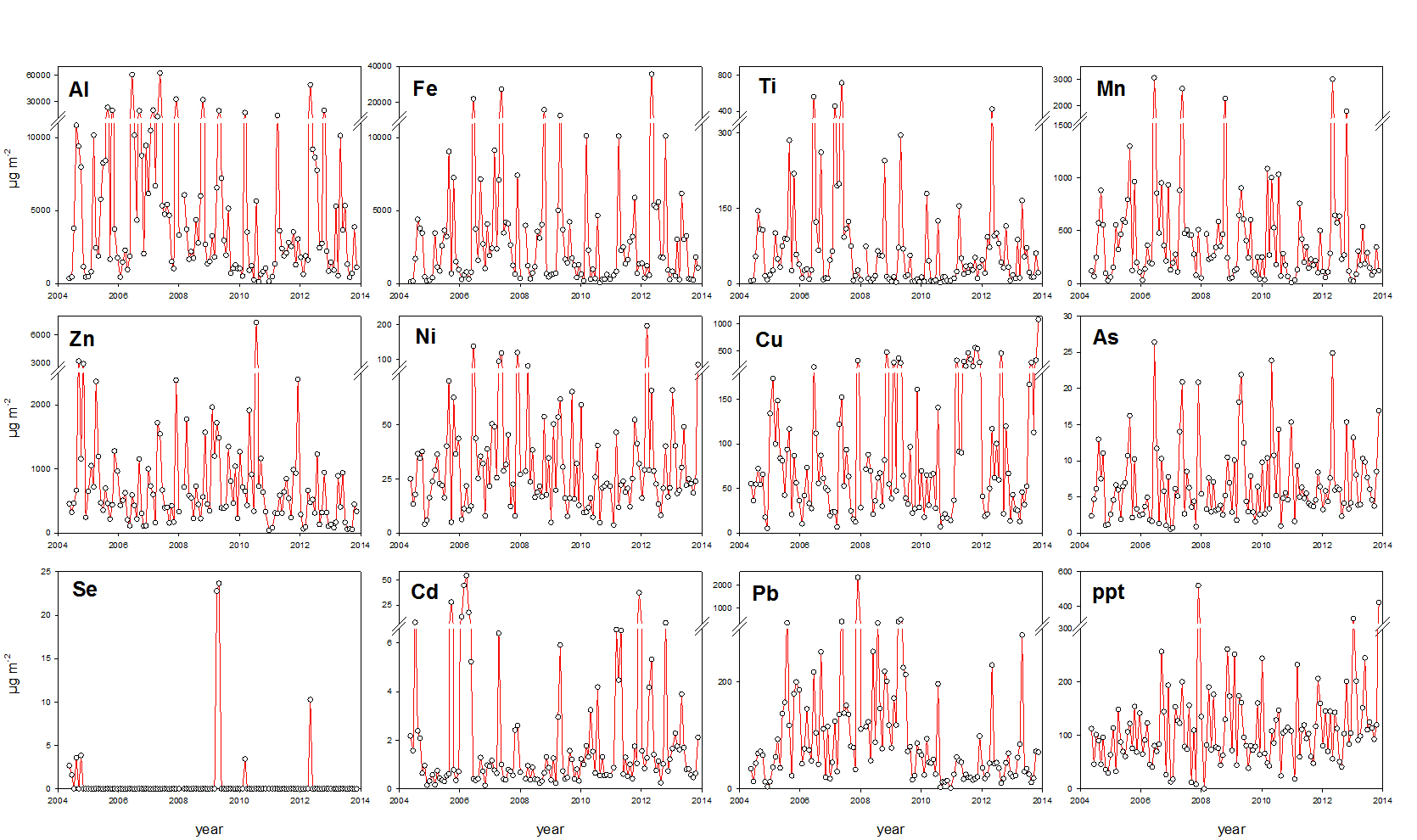 Deposition time-series for the elements analyzed and amount of precipitation (ppt, in mm) recorded during four-week sampling periods from 2004 to 2013 at the Lake Redon station. Note the breaks in the Y-axes of most graphs. Deposition time-series were highly fluctuating. One of their features was the occurrence of more or less frequent extreme events. None of the deposition time-series showed an obvious monotonic trend. Only when taking into account other underlying sources of variation were trends detected. A multiple regression analysis showed that, in most cases, there was a seasonal cycle and a precipitation amount effect on deposition. When these were removed, a significant (although weak) downward trend was identified for Al, Mn, Zn and Pb.

However, we identified three main modes of variation. To do so, we applied a Factor Analysis (FA) to our data. FA is a multivariate statistical method used to describe variability among observed, correlated variables in terms of a potentially lower number of unobserved variables called factors, which are uncorrelated with each other. The results of FA were that the elements analysed can be represented by three factors. The first factor (F1) included the crustal elements (Al, Fe, Ti, Mn) and Pb. The second factor (F2) included precipitation volume, Ni, As and Cu (though the latter with a weak loading). Finally, the third factor (F3) included Zn, and two elements that also loaded on the first factor: Mn and Pb.

Changes in the value of the three factors extracted by the Factor Analysis over time. The red lines show the smoothed (LOESS) series using two different sampling proportions for the smoothed values. A larger proportion (0.4 in this case) yields a smoother line revealing longer temporal variations; a smaller proportion (0.1) preserves shorter variations like the seasonal cycles shown here.

Each factor showed a different pattern of variation over time: F1 showed an apparently cyclic fluctuation, with cycles of c. 8 years. F2 showed a steady upward trend. F3 showed constant values up to mid 2009 and then a downward trend, which was sharper at the beginning than in the final years. On the basis of these results we concluded that:

1) Deposition of crustal elements and Pb followed the variation in NAO. Under a positive NAO, drier conditions in North Africa may favor the entrainment of dust into the atmosphere and thus increase the transport of associated elements. Our data showed a fluctuation that could fit the ~8-year cycle described for NAO. Deposition responded to NAO fluctuation with a six-month delay

3) Deposition of Pb and Zn (and Mn to a lower degree) followed the urban and industrial emissions in Europe and North America with a delay of about 1-2 years. The most important feature was a pronounced decline in emissions that started ca. 2007-2008 (with the global financial crisis and the subsequent Great Recession), and was followed by a decline in deposition starting in 2009.

As a whole, background deposition of trace elements appeared to be a complex process, driven not by a single underlying factor but by a combination, including climatic as well as anthropogenic factors. 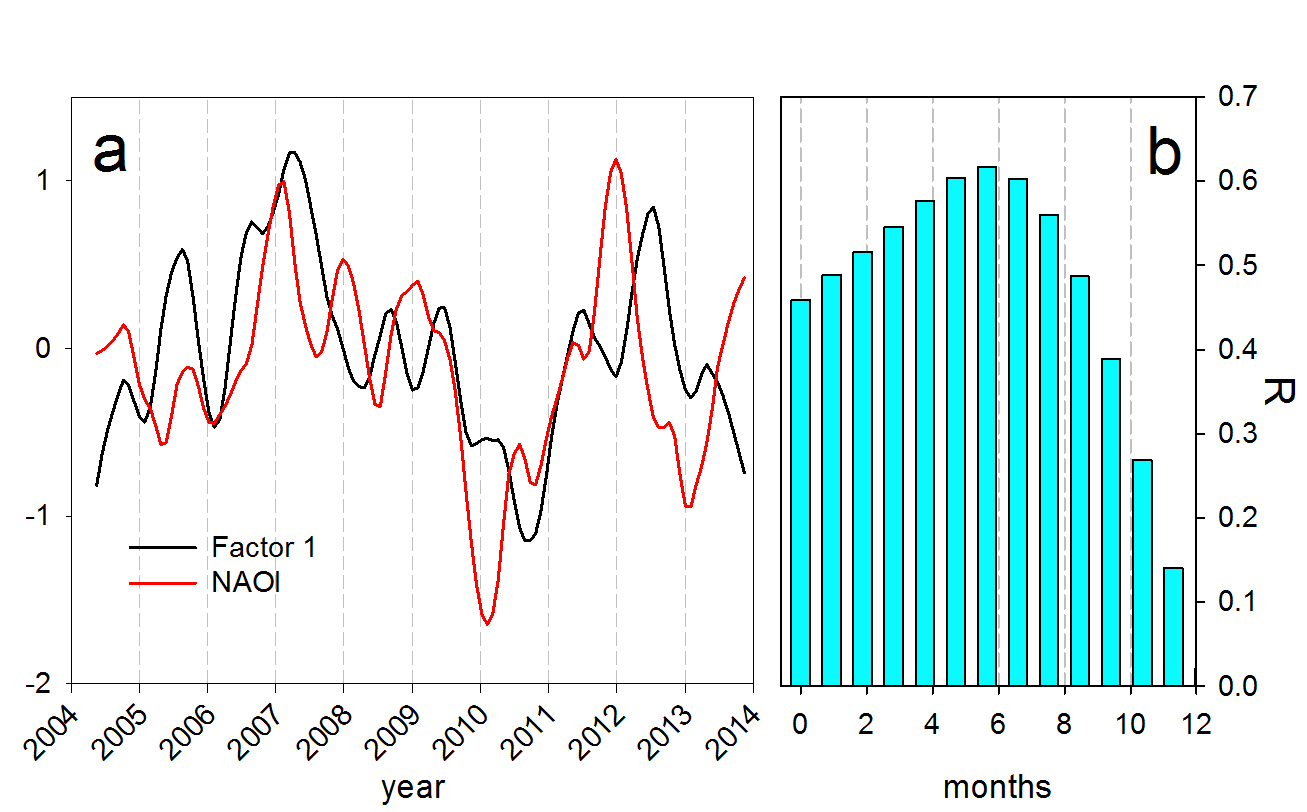 The patterns of variation of F1 and the North Atlantic Oscillation index (NAOI) were similar, but Factor 1 was delayed by nearly six months (a), as shown by the cross-correlation plot (b) between the two time-series. The maximum correlation is reached when Factor 1 is shifted backwards with respect to NAOI by a lag of ~6 months. Therefore, it is possible that the deposition of elements associated with F1 was influenced by the meteorological conditions (as represented by NAOI) of the previous months. The export of dust from North Africa to the Mediterranean area is influenced by NAO, and so is the deposition of elements associated with dust, such as P for instance: higher NAOI values correspond to dryer meteorological conditions in North Africa and the Southern Iberian Peninsula that enhance dust export, due to both low soil moisture and little atmospheric washout in the source areas. To explain the 6-month decoupling between NAOI and deposition, we hypothesize that NAO in winter and early spring (the rainy season in the area) is crucial in determining the dryness conditions throughout the year that will in turn determine the production of dust: dryer winters in the source areas mean higher dust export, which is mainly recorded as higher summer deposition in the Pyrenees. 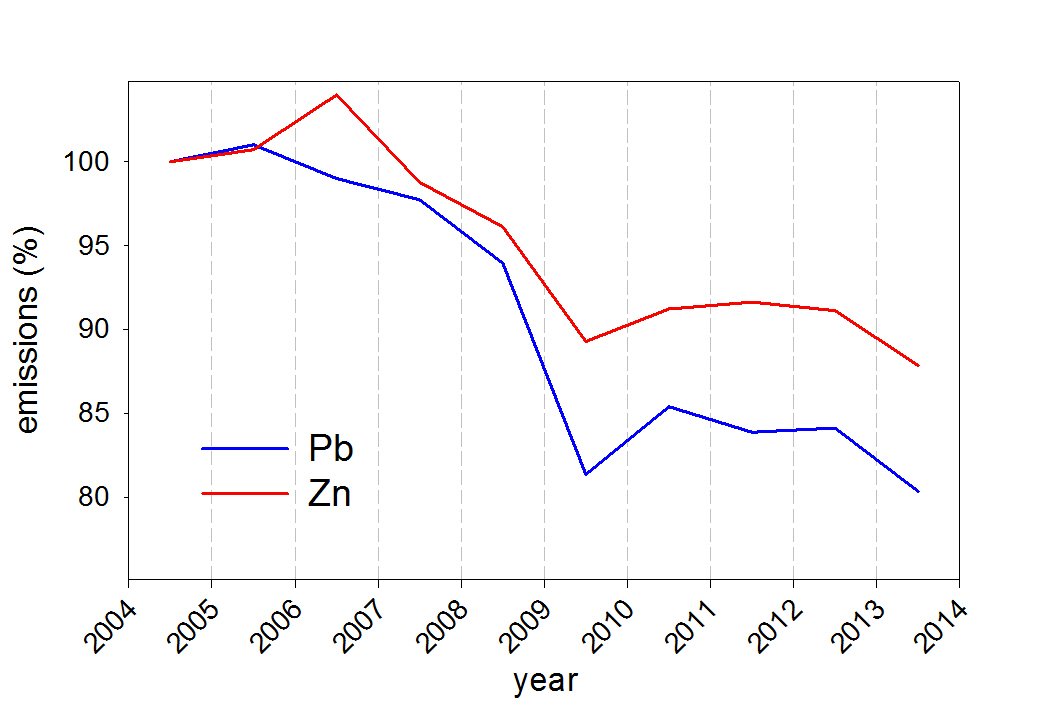 Pb and Zn total emissions to the atmosphere from France and Spain during 2004-2013, expressed as a percentage referring to the 2004 emission. Data is from the EU emission inventory compiled within the UNECE Convention on Long-range Transboundary Air Pollution (LRTAP), available here. The main feature of the time-series is a marked decrease at the midpoint. Although the introduction of cleaner technology has certainly played a role in the abatement of emissions in the long run, the sudden decline in emissions is attributable to the 2007-2008 global financial crisis. The matching decrease in steel production, both an indicator of industrial activity and one of the largest sources of emitted Pb in Europe, supports this notion. 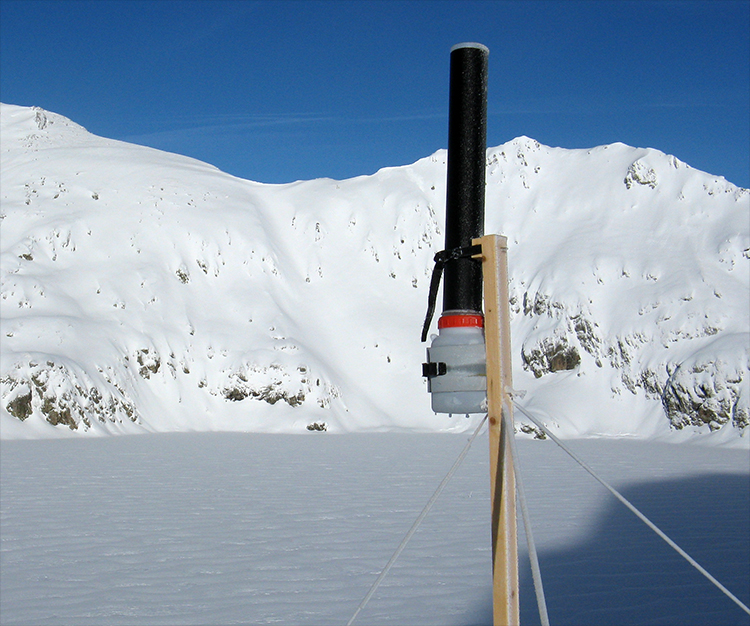