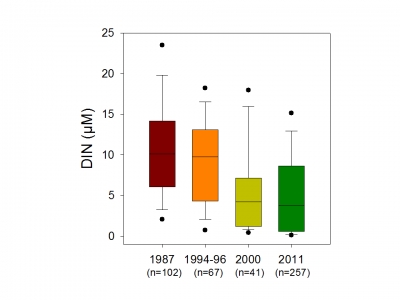 The acceleration of industrialization since 1950s resulted in a progressive increase of nitrogen forms that can easily be easily assimilated by living organisms (e.g. NH4+: NO3-). Currently reactive nitrogen has duplicated natural levels existing just less than a century ago in our planet. As some compounds are easily volatile, reactive nitrogen has spread beyond human activity areas and, in greater or smaller degree, is affecting relatively remote zones through increase of ammonium and nitrate in the deposition.

The aim of this study is to analyze the effects of this deposition increase on high mountain lakes, taking the Pyrenees as case study. On the one hand, we try to document the process by i) analyzing series of existing data that partially cover the development with the process, and ii) carrying paleolimnological reconstructions at high-resolution of the last centuries. One the other hand, we seek iii) to improve the knowledge of some key processes of nitrogen cycle in this lakes (nitrificación, denitrificación) and iv) to determine the effects of nitrogen availability (e.g. N: P) and proportions between different forms (e.g., NH4+: NO3-) on the configuration of primary producer communities. We expect that results can be generalised to understand what may have been happining in other lacustrine mountain districts of similar characteristics distributed aRound the planet.