Four projects of the Pyrenean Observatory of Climate Change (OPCC) have been awarded with european funds. Thanks to this funding the OPCC will carry out during the next three years an action plan for the adaptation to Climate Change. This consolidates the Observatory as the most relevant transboundary cooperation initiative between Spain, France and Andorre on this matter. Read the new on the newspaper.

The OPSS2 project and its four associated projects funded by the POCTEFA 2014-2020 programme. The Pyrenean Observatory aims to monitor the Climate Change in the Pyrenees to help the territory to adapt to its effects. Is the transboundary cooperation initiative more relevant in which the basque Country participates within the Working Community of the Pyrenees. Read the new on the web site.

The European Commission co-funds a 65% of the works for adaptation to climate change of the Pyrenean Observatory (OPCC2), and its four associated projects. The catalan government (Generalitat) and other eight catalan partners will benefit from the grants to advance knowledge on climate, forests and flora. Read the new on the OCCC web site.

The European Commission has aproved funds for the action plan of the Pyrenean Observatory of Climate Change on environmental adaptation. The Working Community of the Pyrenees is the main partner of the project. Read the new on the newspaper.

The European Commission has aproved more than 3 MEur funding for the action plan of the Pyrenean Observatory of Climate Change on adaptation to Climate Change. This consolidates this transboundary cooperative iniciative between Spain, France and Andorre as the most relevant one on this issue. Read the new on the newspaper.

The project of the Pyrenean Observatory of Climate Change, promoted by the Working Community of the Pyrenees (CTP), will receive 763K Eur from the European POCTEFA funds. Its four associated projects will receive another 2.3M Eur. Read the new on the e-newspaper. 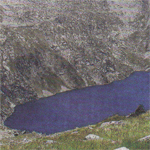 The Municipality of Vielha-Mig Aran and the CSIC will collaborate to promote the investigations carried out by the LOOP at the Center for High Mountain Research located. The Center is located in Aran and next year its 30th aniversary will be celebrated. The municipality is involved in an international project to spread the concern about the sustainable use of water among citizens. 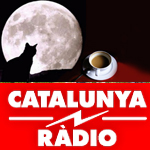 How does climate change affects high mountain lakes? What is ecology? What influence do humans exert on our environment? "El Cafè de la República" talks about it with Jordi Catalan, Ph. D. in Biology for the University of Barcelona and researcher of the Centre de Recerca Ecològica i Aplicacions Forestals (CREAF) and the LOOP, recently awarded with the Premi de Medi Ambient (Environment Award) of the Institut d'Estudis Catalans.

Interview with Berta Fueyo and Lluís Camarero. Berta and Lluís explain how is the work done at the LOOP's lab.

A study by LOOP researchers shows that human activities and the global change have direct consequences on high mountain lakes. The work has detected an increase in the atmospheric phosphorus that is deposited on the lakes, and the results prove changes in their chemical composition. Since the 80's, the human impact has produced also an increase in the atmospheric deposition of nitrogen. 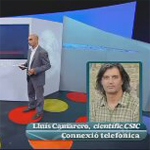 Alfred Rodríguez Picó interviews Lluís Camarero in his TV show on BTV. Lluís talks on the recent results published in Nature Communications. Atmospheric fluxes of N and P affect the ecological functioning of high mountain lakes in the Pyrenees in an unsuspected way. Follow the link to see the interview, at minutes 18:35-25:20.

Snow is arriving very late this season at the Pyrenees. By the end of January the amount of snow in the mountains is well below the average, and the water supply to lowlands during the spring thaw is at risk. TV reporters climbed to lake Redon together with LOOP's researchers during one of the regular field trips to monitor the ice cover of the lake. Still only a thin layer of clear ice covers the lake, when a thicker snow and ice cover could be expected.

Interview with Lluís Camarero on the climate change and its influence on lake Redon. Listen to the interview at minutes 24' 40" - 34' 30"

An indicator of pollution: the researcher Montse Bacardit has discovered that the almost inaccesible mountain lakes of the Central Pyrenees and their catchments are polluted by a suite of metals potentially toxic to the ecosystem. Montse Bacardit is graduated in Biology by the University of Barcelona. In her Ph.D. Thesis she has studied the pollution in high mountain catchments. 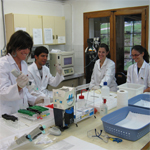 The Association Ribagorça Romànica will award 6 undergraduated and graduated students in biology and environmental sciences with grants to participate in the NITROPIR project. The students will collaborate in the synoptic survey that the LOOP will carry out in 500 Pyrenean lakes in order to analyse the changes produced in the water chemistry by the human N emissions 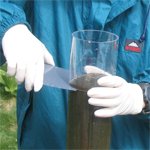 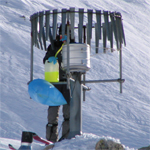 In her Ph.D. Thesis presented at the University of Girona, the LOOP's researcher  Montserrat Bacardit shows how remote mountain areas are afected by toxics originated by human activities

Interview with Lluís Camarero. Lluís explains the most recent activities of LOOP: new projects, studies and significance of the  atmospheric deposition of reactive nitrogen onto the ecosystems, and launching of the Long Term Ecological Research (LTER) node in the Aigüestortes National Park in consortium with researchers from CSIC, UB, UAB, IC3 and CREAF.

TV3 reporter Salvador Sala accompanied a LOOP's  team right to the middle of lake Redon, where the scientists run tests to assess the pollution levels. Levels that one would not a priori suspect in these apparently pristine paradises. Follow the link to watch the report at minutes 0:56-1:30 (intro) and 5:10-12:30 (main footage).

The Sorcerer II made a stop in Barcelona's harbour in its cruise aroud the world collecting DNA to sequence the genome of the oceans. During the pause, some researchers from the Craig Venter Institute made a tour on land to collect also samples from freshwater ecosystems in collaboration with local scientists. Among other places they visited Lake Redon.

A report on the levels of pollutants in lakes and rivers of Catalunya elaborated by scientists of the CSIC, the University of Barcelona (UB) and the Autonomous University of Barcelona (UAB) for the Department of Environment of the Generalitat de Catalunya revealed that the sediments of lakes in the Pyrenees contain metals and radionuclides of human origin. Majors of several towns in the area have expressed concern and urged a meeting with the Head of the Department of Environment.

The EMERGE project, in which LOOP participated, ended. EMERGE was funded by the European Commission, and among other objectives, it aimed to investigate the impact of airborne pollutants on alpine lakes. Sediments from over 390 lakes in all european ranges showed the extent of pollution by metals and organic chemicals in high mountains. An agreement between the Conselh Generau d'Aran and the University of Barcelona has been signed to monitor the impacts of the works of the new tunnel of Vielha on the Nere and Conangles streams.