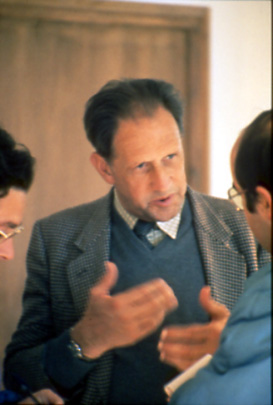 The direct antecedent of the LOOP has been the Centre for High Mountain Research (CRAM) of the University of Barcelona, which was launched in 1984 by Prof. Ramon Margalef. Since earlier times, Prof. Margalef has stimulated and inspired the limnological work in the Pyrenees. In the 1950’s he released his first studies on plankton from Pyrenean lakes. In 1975, he and his students conducted the first extensive limnological study in the Pyrenees. They sampled more than 30 lakes for chemistry and biology, and involved mountaineering clubs in sampling plankton in a larger number of lakes during their sports excursions, in an early citizen-science experience. The CRAM is located in the Val d’Aran (Central Pyrenees) at 1600 m a.s.l., and it was originally intended as a facility for field-based studies on the limnology of the Pyrenees. It took over leadership in Pyrenean limnology from the laboratory of Orèdon of the University of Toulouse, in the Néouvielle massif, which had been very active during the 1960-70’s. Groups working in the fields of glaciology, geology, botany, and zoology joined the CRAM later on, although the limnological work has remained as the main activity. Since 2002, the CRAM is the base of a team from a Mixed Research Unit, the Limnology Group, composed of researchers of the University of Barcelona (UB) and the Spanish Council of Science (CSIC), who are the core staff of LOOP.